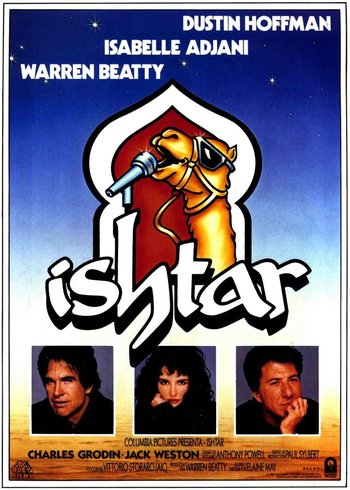 "The best that can be said about Ishtar is that Warren Beatty and Dustin Hoffman, two of the most intelligent actors of their generation, play dumb so successfully that on the basis of this film there's no evidence for why they've made it in the movies."
— Roger Ebert
Advertisement:

The 1987 comedy Ishtar is about a pair of talentless and incredibly stupid lounge singers, Lyle Rogers (Warren Beatty) and Chuck Clarke (Dustin Hoffman), who can only get booked in the Middle East, where war rages and religious fanatics claim of a prophecy involving two men who will bring down the country's brutal leader. Since the CIA has major fundings in this country's current government, they first train Chuck as a spy, while Lyle falls in line with the rebels. Then when the government of Ishtar learns that these two "smucks" might be confused with the prophets, the CIA sends the two of them out into the desert to get lost, and then try to kill Rogers and Clarke when they accidentally manage to navigate through the desert and not die. Due to all the various political conflicts brought up by these events, the United States makes a deal with the lounge singers, which involves giving the people of Ishtar more freedom and Rogers and Clarke a recording contract.

The production of Ishtar was set into motion by way of the fact that writer/director Elaine May had cowritten one Warren Beatty hit (Heaven Can Wait) and did a major rewrite on another Beatty hit (Reds), and Beatty wanted to work with her on something that she wrote and directed. May came up with an idea inspired by the Bob Hope and Bing Crosby Road to ... series and got another bankable, respected actor, Dustin Hoffman, to costar. A big studio, Columbia Pictures, put a lot of money into this movie. What Could Possibly Go Wrong?

There were production problems right from the start— firstly, the Coca-Cola Company, which owned Columbia at the time, insisted that due to other business deals Coca-Cola was involved with, the movie had to be shot in the real Sahara Desert, even though it would have been cheaper to shoot it in the Southwest United States. There were high political tensions in North Africa that made the movie dangerous to shoot (there were worries that Palestinian terrorists might try to kidnap Hoffman), and Executive Meddling, combined with a conflict between producer/star Beatty and May (both strong perfectionists with differing ideas on how the film should have been shot), brought the costs up further.

The film was completed, and it was funny. New York Times film critic Vincent Canby listed it as one of the best films of the year, and multiple film directors have cited it as one of their favorite movies, including Martin Scorsese, Quentin Tarantino and Edgar Wright. Beatty and Hoffman were also happy with the final film.

However, the studio changed heads during release, and the new executive, David Puttnam (who had previously competed against Beatty for a Best Picture Academy Award with their films, Chariots of Fire and Reds, respectively), sabotaged the movie by slamming it and its actors, setting off a whirlwind of bad promotion. A majority of film critics, riled by the expense of the film, slammed it, without giving it too much of a chance, and this film was so much of a loss for Columbia that the studio was spun-off into its own company and bought the rest of TriStar Pictures in a merger following a similar box office failure for Terry Gilliam's The Adventures of Baron Munchausen, and then the merged Columbia/TriStar was later sold to Sony. However, despite its reputation as a "flop", Ishtar actually beat out some good competition, and could have done financially well if it had not been so expensive to produce. Still, its massive financial failure caused significant damage to its reputation.

Despite the poor reception it received at the time, Ishtar is not received nearly as badly as it once was, and even though it is one of a handful of films that are synonymous with the phrase "Box Office Bomb", most viewers find it relatively entertaining. Even Gary Larson, who had mocked the film in one Far Side cartoonnote specifically, the cartoon where Ishtar is the only movie available at Hell's Video Store, admitted that he had made assumptions based on the film's reputation, and it was actually pretty funny when he finally saw it on an airplane. It's basically a good movie beset by production and financial issues that marked it unfairly in the eyes of the public.

For more about Elaine May's battles with film studios, read about A New Leaf.