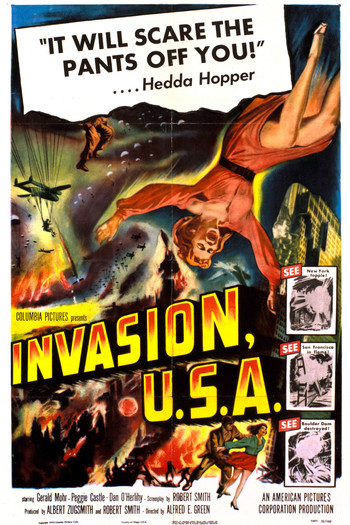 Mr. Ohman: The manufacturer wants more war orders, and lower taxes. Labor wants more consumable products, and a 30-hour week. The college boy wants a stronger army, and a deferment for himself. The businessman wants a stronger Air Force, and a new Cadillac. The housewife wants security, and a new dishwasher. Everyone wants a stronger America, and we all want the same man to pay for it. George. Let George do it.
Tractor Manufacturer: I disagree with you — I don't want to let George do it!
Mr. Ohman: Then you must be the exception?
Tractor Manufacturer: No — I'm George!
[everyone laughs]note Crow: Ha ha, I kill you last.
— The movie gets Anvilicious about the Aesop at the beginning.
Advertisement:

Invasion U.S.A. is a 1950s Red Scare propaganda film that purports to show the American audience how quickly the Cold War could heat up, and thus the importance of the military-industrial complex and the universal draft (and by universal, they don't mean the usual interpretation of drafting women into the armed forces — no, they mean everything).

The film was directed by Alfred E. Green, and quite the departure from his usual light fare, such as The Jolson Story and Four Faces West.

One day in a bar, with news of Cold War tensions on the TV, a reporter comes in to ask the patrons — a motley bunch from all walks of life — if they support allowing the U.S. government to take over companies in the name of the Cold War effort. Most of the patrons are skeptical except for a strange man nursing a wine glass at the end of the bar — one Mr. Ohman (Dan O'Herlihy), who delivers a What The Hell, Citizen speech to everyone accusing them of just wanting to wish their problems dead instead of doing what needed to be done. After mesmerizing his audience with his speech before leaving, the patrons quickly discover that the U.S. is now in the middle of World War III, as "the Enemy" (totally not the Soviet Union) conducts an audacious plan to invade the North American mainland, with both nukes and paratroopers flying freely. The main characters try to do what they can, but somehow every request of the military-industrial complex that they'd been complaining about or ignoring comes back to bite the U.S. at the worst possible time, and the cast starts dropping like flies before the Red onslaught.

In the end, through the germanic man's hypnotizing the entire bar into seeing visions of what might be, the naysayers are shown the evils of their ways and pledge to be more patriotic afterwards. And the reporter hero manages to win the affections of the heroine from the tractor manufacturer who brought her to the bar.

For tropes and episode details related to the MST3K version, please check out the episode recap page.

No relation to the 1985 Chuck Norris movie of the same title.