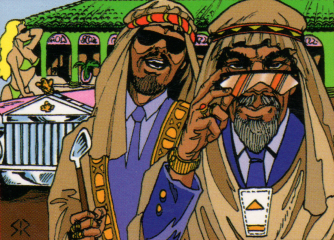 The Sheik, he drove his Cadillac
He went a-cruisin' down the ville
The muezzin was a-standin'
On the radiator grille
—The Clash, Rock the Casbah
Advertisement:

They're from Arabia and they're accumulators.

The Arab Oil sheikh is a rich Arab man with big investments in oil. He is typically seen in Arab dress, complete with keffiyeh, sometimes wearing dark aviator sunglasses when traveling abroad, or in a fine western suit and the keffiyeh and sunglasses. He will sometimes attempt to purchase the services of local prostitutes.

Often referred as the source of various pictures of excess luxury in Snopes.com's photography section

, claiming they have, for example, cars made of solid silver, or coated in diamonds. (Back when Texans were the ones considered super rich, one example was the Texan who gave away his Cadillac and bought another one once the ashtrays were full. Yeah, and he smoked too, it was that far back.)

This character type is often brought in to teach a character An Aesop about putting his friends before monetary gain. This often involves the Sheikh innocently offering said character a large reward for a task that involves stepping on the character's friends in order to succeed.

A common outcome is that the character fulfills the requirement while managing to help his friends as well, but he then turns down the reward because he's learned that money isn't the only thing in the world.

In the present climate, they might be involved in financing terrorism. Sometimes The Con will involve someone using this trope and posing as a rich Arab to help explain a source of abundant but eccentric money for the mark, in which case the "Arab sheikh" plays a similar role to the "Nigerian prince" in a 419 Scam.

They also turn up a lot in romance novels, where they are dark, brooding, passionate and rule everything they survey in their desert kingdom with the same tenacity they show towards the heroine. Sheikh romance actually gave us the term "bodice ripper" due to the common kidnap-rape-love plots that featured where the Arab can get away with being beyond normal constraints in how he treats the heroine due to his exoticism. He'll still have the education of Lord Byron though and the manners of a prince which is kind of the point: these books want someone who lives in the closest thing to a modern lavish royal court and acts like the Black Death hasn't gone out of fashion. He will also turn up as a villain trying to buy or kidnap the female lead for his harem.

An indispensable addition to any (generally evil) Cosmopolitan Council. In more comedic works, he is almost inevitably a Funny Foreigner. If his home country isn't a real one, it's Qurac.