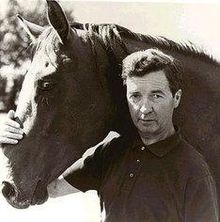 "Crime to many is not crime but simply a way of life. If laws are inconvenient, ignore them, they don't apply to you."
Advertisement:

Richard Stanley Francis CBE (31 October 1920 – 14 February 2010), better known as Dick Francis, was a British crime novelist whose works invariably had some connection with Horse Racing. Prior to becoming an author, Francis had himself been a successful jockey — winning 350 races, most notably on horses owned by HM the Queen Mother. However, his most famous race was a loss; in the 1956 Grand National on Devon Loch, he had a five-length lead going into the home stretch, only for the horse to unexpectedly jump in the air and fall on its stomach

note  this gave rise to the phrase "doing a Devon Loch" to describe an act of failing to win at the last minute despite being in a seemingly unassailable position; it's used by British sports journalists to this day. After retiring from racing, he took up writing, initially with his autobiography. His first novel was published in 1962, following which he wrote a novel a year for the next 38 years.

The influence of his wife Mary (nee Brenchley) on his writing has been argued to be quite large — Francis himself described their efforts as teamwork. Works written after Mary's death in 2000 arguably suffered in quality. Francis also wrote four novels with his son, Felix Francis, who went on to publish novels under his own name after Dick's death in 2010.

For his work, Dick Francis was honoured by both the Crime Writers' Association and the Mystery Writers of America; one of his novels (Whip Hand) won the former's Gold Dagger, and three (Forfeit, Whip Hand, Come to Grief) won the latter's Edgar Award.