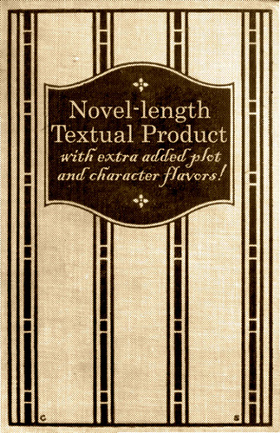 Book publishing, like with any other creative product, is primarily about business, not art. Most normal publishers only want to publish books they think will sell, and will publish manuscripts that have possibilities of reaping good sales. Sensible publishers will try to publish good manuscripts under the logic that quality is appreciated. Vanity publishers really don't care either way and will publish anything, as they make their money off the authors rather than the audience. Some publishers go a step further. They churn out books as if they were a machine, and authors were merely cogs.

The result is Extruded Book Product. A type of book that is thoughtlessly put out once a month (or more often sometimes) by a publisher that usually hires multiple writers to anonymously author the books, often under a Pen Name. By now, everyone knows that The Hardy Boys and Nancy Drew are actually written by multiple authors who use the same House Pseudonym. But there were times when this business model was more common — when there were a number of "book mills", so to speak, that pumped out books by a schedule no matter how many individuals actually manned the positions.

Different companies have different ways of doing this. Some companies, such as Badger Books, would commission a cover artist and a blurb, and then hire a writer to hastily put together something that fit both. Other companies would have individual writers come up with stories that fit the characters, while some companies would create story outlines ahead of time and hire writers to write based on the outline. Whatever it took to churn out book after book.

This phenomenon continues because enough readers accept and even want it. Readers who read for escapism and Wish-Fulfillment, especially in certain genres catering to those wants, expect and want one story told in multiple superficially different ways and do not want to be challenged. The writers and publishers, meanwhile, just want Money, Dear Boy.

See also Airport Novel, the next step up from this in terms of light, disposable reading.