Literature / Paris in the Twentieth Century 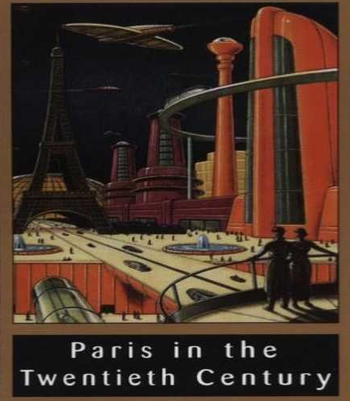 Paris in the Twentieth Century was one of the first science-fiction novels written by Jules Verne, but the last to be published — in 1994, after lying forgotten in a safe for over a hundred and twenty-five years.
Advertisement:

While a good read, the novel isn't Verne's best. What makes it very interesting, however, is the accuracy of its many predictions about the future. Verne wrote the novel in 1863, and it is set in the far-off futuristic world of 1960. Verne did a remarkably good job of predicting the world one hundred years in his future. Amusingly, one of the reasons his novel was not published for so long is that publishers originally felt his predictions to be too unrealistic.

As an initially unpublished (and largely unedited) work, the novel is closer to Verne's post-Protection from Editors style than the writings most readers will be familiar with, particularly in regards to its cynicism. Verne imagines the Paris of 1960 as a bleak dystopia where art and creativity are stifled, and cold-hearted pragmatism, logic, commerce, and industrial development are the only things that anyone cares about. This attitude probably stems from Verne's early job as a stock broker, which he hated from the bottom of his heart, and which caused his lifelong contempt of Corrupt Corporate Executives and their worldview.

Michel Dufrénoy, the protagonist, is one of the last students of the humanities graduating from his university, a cause for shame for his family, and endless misery and failure for him throughout the story as he struggles to survive alone in a cold, mechanized world without losing his identity. (Today in the real world, people would likely tell him to prepare for a lifetime of serving fries...) The depressing tone and message of the novel is the other, and likely bigger, reason why it was initially denied publication and remained forgotten for so long — a first sign of Hetzel's lifelong editorial pressure, as he felt them too ingrained in the novel to be edited out, and canned it indefinitely.

Notable predictions of Paris in the Twentieth Century
Advertisement: