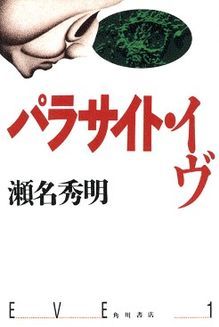 Parasite Eve is a science fiction/romance-y book written by Hideaki Sena that was published in 1995. It was adapted into a movie and strangely, both have been released in America, the movie in 2001 by ADV Films and the novel in 2005 by Vertical.

In it, Kiyomi Nagishima, wife of Toshiaki Nagishima, crashes her car. Kiyomi survives but is brain dead. Toshiaki and Kiyomi's doctor transplant her kidneys into the teenage girl Mariko Anzai as an organ donation. What they didn't know was that Kiyomi's mitochondria had undergone an evolution, granting them special powers and a will of their own. Toshiaki is compelled to culture Kiyomi's liver cells (with help from lab assistant Sachiko Asakura), which he refers to as Eve, and the mitochondria in Mariko's new kidney start transforming her into something suitable for giving birth to the next step on the evolutionary ladder. The story then goes rather haywire as Eve takes on a form of her own, kidnaps Mariko, starts setting people on fire, and acquires a sperm sample from Toshiaki to create the Ultimate Being.

Oh, did you come here for the video games? You can find the first in the trilogy here.

For now, the character sheet mostly pertains to the games.