No New Fashions in the Future 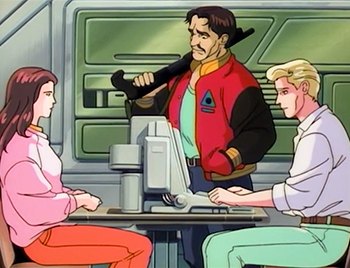 "The movies that you're dressing like are just copying other movies. These goddamn 20th century affectations. Do something new, you know? Put a glowing thing around your neck or use rubberized—just be new!"
— Abe in the year 2044, Looper
Advertisement:

Sometimes creators of works of speculative fiction make up all kinds of futuristic machinery and even architecture, but do not bother to create futuristic-looking fashions for their characters, instead opting to use contemporary styles. This creates an effect similar to that of Zeerust, in which the style of the work seems dated not because they were trying to look futuristic, but because they couldn't see beyond their own contemporary looks.

Sometimes it is justified by some specific pieces of Truth in Television, like how many modern hairstyles have been around for centuries (often pointed out in movies), and how men's suits have changed remarkably little in over 140 years

(albeit going from casual sporting wear, to business dress, to the most formal thing many men will ever put on). More specifically, within the past 60-70 years, styles in suits have entered a more or less cyclical pattern (one decade wide tie, one decade skinny tie, one decade more colors, one decade fewer colors, one decade wide lapel, one decade narrow lapel...) as decades borrow from past ones (witness the Mad Men influence on contemporary fashion). On top of that, jeans have been the youth's casual trousers of choice in North America for some seventy years now (almost a trope of its own). By the same token, the Little Black Dress has, with minor tweaks, been universally acceptable for women since the 1920s (nearly a century—which by the standards of women's fashion might as well be an eternity). But this isn't the case once enough time has passed. Just compare how different medieval and Roman styles looks from each other; logically fashion two hundred or so years from now on will be just as different. Or just compare women's fashions of 1900

Anyone who thinks "but fashions don't really change that quickly, so why bother?" needs to take a look