No Backwards Compatibility in the Future 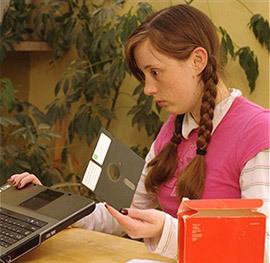 "Alright, time to play me some
King's Que... oh."
"Spies are used to battling cutting edge encryption and billion dollar security, but sometimes the toughest challenge is cracking something old and out of date. If you find yourself up against an obsolete tape drive loaded with arcane software, you can either find yourself a time machine, or admit defeat."
— Michael Westen, Burn Notice
Advertisement:

Our time-traveling protagonists need to recover a piece of information on a computer from our time and they end up stealing the whole laptop. The Fridge Logic asks why didn't they simply just do a file transfer? As it turns out, the future tech doesn't work with tech from our time. Even though the future technology has its roots in the technology that we have currently developed, it is not backward compatible with that of its predecessors.

Let's think about that for a moment. In the 1970s through the 1980s, the common forms of data storage for mainframes and minicomputers were 1/2", 1200' magtape reels (capacity about 60MB), and punched cards (96 bytes on the IBM S/38 card, 80 bytes on the standard Hollerith card). Minicomputers and microcomputers might use paper tape or 8" floppy discs. None of these are readable today by most equipment. In the 1980s-1990s, the 5 1/2" floppy disc and the 3 1/2 inch hard shell floppy were popular. Today, most computers do not have floppy drives. Many don't even have optical drives. And there was the Zip disc around 1995-2000, which was readable/writable either by an external drive or you could buy one to install like an extra floppy disc. Nobody uses Zip discs any more.

Now let's go backwards. Today, in the 21st Century, if you have to move a medium-sized file, say a 2GB 10-minute video from one computer to another, what would you do? Copy it over the internet or onto an SD card or external hard disk. But let's say you wanted to take that video into the past and make it widely available. Prior to about 1995 access to the Internet was rare, and slow (most people at best had modems at 14.4kbps while the few poorer folks were still stuck at 9.6kbps, and a "broadband" 128kbps ISDN internet connection cost several hundred dollars a month. Cable internet, which promised supreme speed, was still in development at the time). Copy it from your external hard drive, jump drive, or SD card and adapter? Prior to 1998 Windows did not support USB and even then it wasn't reliable. But let's say you figure a way to connect your device, how do you copy it then? Copy it to or from flash media? Prior to about 2004, the most common form of flash-type external device was SmartMedia, and the maximum size was a whopping 128 meg. SD cards didn't exist then, writable CD drives (capacity 500MB) were available, but (writable) DVD drives weren't.

Now, this is just what has happened over about the last 45 years: 1975 until now. Imagine the changes over a hundred or two hundred years.

This can also be applied to a post-apocalyptic future stories only if the equipment is in good condition due to Ragnarök Proofing. Otherwise it is merely a subversion or aversion of said Ragnarok Proofing.

Of course, when the record must be accessed, this is a job for Mr. Fixit to rig something up to make that possible.

Truth in Television; somewhere along the line, certain new technologies may not be backward compatible with their older versions, because they were deemed obsolete or just not worth the extra cost. Indeed, a significant portion of early electronic archives (1970s through early '90s) are now inaccessible, or nearly became so, because the hardware or file format became too outdated.

The inversion of this, where things that shouldn't be compatible are, is Plug 'n' Play Technology.