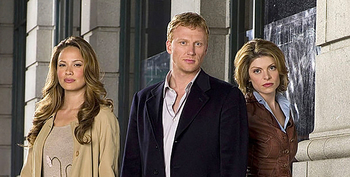 Moon Bloodgood, Kevin McKidd, and Gretchen Egolf.
Canceled NBC series that got a brief run in late 2007. It was about Dan Vasser (Kevin McKidd), an Everyman who goes back in time involuntarily, regularly experiencing Mister Sandman Sequences, to Set Right What Once Went Wrong.
Advertisement:

Later in the show, the impact of his travel on his present-day life was essentially the focus of the show, and the actual reasons for the travel into the past were dealt with in each episode as an afterthought (both by the writers and by the main character himself, who often got yelled at by his more experienced companion for inattention to duty).

Not to be confused with The Journeyman Project, a series of point-and-click adventure games which also deal with time travel but are otherwise unrelated.