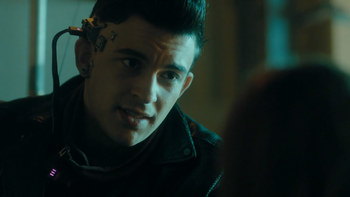 This does for computers and technology what Translator Microbes do for living beings.

In fiction, all computers, machines, hardware and software are 100 percent compatible and interoperable with each other, and then some. It's as if everything was built according to some universally agreed technical standard.

Plug any computerized control unit into any arbitrary machine, and the computer system will automatically have full communications and control over the device, regardless of how superficial the installation is or whether the device even has any electronic components to begin with — if you plugged a computer into a wheelbarrow, your computer would display (in real time) how much potting soil and garden tools it currently holds, and you'd be able to drive it by remote control.

A similar phenomenon occurs when two or more computers need to establish a network to communicate with each other. When the intrepid Wagon Train to the Stars makes their first contact with Starfish Aliens from halfway across the universe, nobody ever stops to figure out how those electromagnetic waves emenating from each other's ships are supposed to represent a communications channel (assuming it even is a communications channel at all) ... or how those aliens suddenly managed to hack into the ship's computers (bypassing whatever passwords and encryption) to steal a copy of all their technical schematics and tactical blueprints. Their starships must run on Plug 'N Play Technology!

This is obviously not the case in Real Life: Without an agreement for everyone to follow fixed technical standards, computers would not be able to tell their precious 0's and 1's apart from each other in the datastream — compatibility is the exception, not the default. You can't open or shut your closet door by plugging a computer into it, or pick up FM stations on an AM radio. US-made TVs aren't built for the higher voltage levels of European electrical outlets (or the PAL broadcast encoding); you can't play Nintendo GameCube discs on your PS3, you can't run macOS executables on the Windows operating system, and the World Wide Web simply would not exist (at least not as we know it) without everyone communicating according to the HTTP technical standard. It's true that at the most basic level, transmissions and instructions (for now anyway) are binary, but there can be no interoperation without a mutual standard for what the binary digits mean, rather like how you can probably read Ojibwe, Vietnamese, or Wolof since they all use the Latin alphabet but will have no clue what it's saying. And all this is assuming both systems are based on binary electricity - compatibility between liquid state or quantum energy based computers is going to be another can of worms.

Plug 'n' Play Technology borders on Forgotten Trope territory these days with the widespread adoption of certain technical standards being something that we take for granted, even when it only enables certain kinds of communication between certain kinds of electronic devices.

The matter can even be Hand Waved entirely if the fictional devices are, in fact, based on Lost Technology left behind by the ancient Precursors. But don't expect any characters to actually address the matter in fiction (at least beyond declaring that A Wizard Did It), when even the Universal Translator requires time to analyze and decipher the latest new alien language.

Please note that this trope has no relation to Plug 'n' Play Friends (which is actually named after this trope's Real Life inspiration), and is not a double entendre for certain adult toys.

Related to Possession Implies Mastery, with the computer being the master. Compare Everything Is Online; contrast No Backwards Compatibility in the Future. A biological equivalent is No Biochemical Barriers.