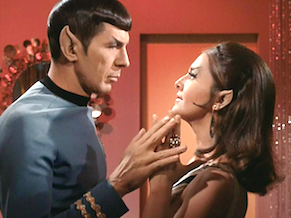 Spock and the Romulan Commander, engaging in what's considered in their respective cultures to be "doin' the nasty."
Advertisement:

It's another day on the Enterprise, and Kirk's acting like he had an extra helping of bitch flakes for breakfast. This becomes especially evident when he orders the ship to fly straight into Romulan space, a direct violation of the peace treaty. Of course, they soon find themselves surrounded by Romulan ships demanding their surrender. Kirk tries to B.S. the (female) Romulan commander by saying it was all a big mistake due to equipment failure. Spock rats him out, saying it was deliberate, resulting in Kirk doing a passable impression of Achmed the Dead Terrorist. Bones comes aboard just in time to see Kirk attempt to carry out his threat, only to be thwarted by the Vulcan Death Grip (tm). "You're dead, Jim!"

This episode is notable for marking the on-air debut of the Klingon D-7 Battle Cruiser... being flown by the Romulans! In-story, this is briefly explained by Spock relaying a Starfleet Intelligence report that confirms that Romulans now have Klingon ships in their fleet. Although the ship was designed and used in "Elaan of Troyius", which was the second episode produced for the third season ("The Enterprise Incident" was the fourth), "Elaan" would be the thirteenth episode aired, after the D-7 appeared again in "Day of the Dove". The 2006 remastered series would retroactively add D-7s to earlier episodes such as "Errand of Mercy" and "The Trouble with Tribbles".