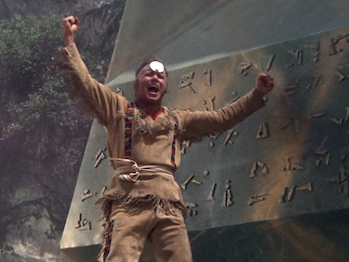 Okay, uh, maybe not the most racially sensitive episode...
Advertisement:

Exterior shot: a Bob Ross painting. Pan right: Our Heroes (Kirk, Bones, Spock) beam down. They comment on how beautiful the place is, how unusually it is like Earth, considering how far away they are from Earth. The only difference between this place and Earth is a mysterious metallic obelisk. Astronomical as the chances are to have a planet with the exact flora and fauna as Earth, they are more concerned about the asteroid that is about to collide with the planet. They have only got 30 minutes before they have to return to the Enterprise, but Kirk thinks that's enough time for him to score—er—explore!

Our Heroes observe a Native camp from a distance. Spock observes that they do not only appear Native American, they are Native American. A blend of Delaware, Navajo and Mohican to be precise. Kirk admires the people, briefly contemplates what it would be like to be one of them, then goes about his way to save them all from the incoming asteroid. Unfortunately, Kirk just happens to stand on a secret passage outside the obelisk, just happens to say the secret password "Kirk to Enterprise" and just happens to fall through and vanish without a trace. Bones wants to look for the missing Captain, but Spock explains to him, using rocks as puppets, why they must hurry and destroy the asteroid.

When Kirk leaves the obelisk, he meets Miramanee and her handmaiden, who are convinced that he's here to fulfill the prophecy. After doing some CPR on a half drowned boy, Kirk is made medicine man. While the medicine man's badge has the unfortunate appearance of an L on the forehead, the former medicine man, Salish, is loathe to part with it. He's even more loathe to part with Miramanee, who, as the chief's daughter, must marry the medicine man. (Sound familiar?) Salish hasn't been this upset since he saw someone littering! How long will Kirk's happiness as "Kirok" last?