Recap / Star Trek S3 E4 "And the Children Shall Lead" 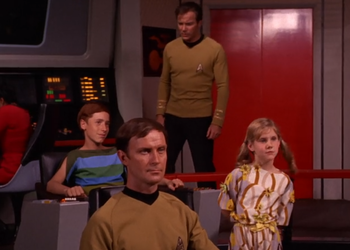 They're Creepy Children, but it's not their fault.
Advertisement:

Kirk, Bones and Spock beam down to Triacus to find that Everybody's Dead, Jim. Well, not everybody. The five children that went with their parents are still alive and oblivious to the fact that their parents are dead. It is at this point, the viewer learns one essential thing. In the future, there is no fashion sense! Tommy appears to be wearing an Old-Timey Bathing Suit. Mary looks like a flower child's acid trip. Don is wearing the curtains from Hell's dining room. Ray looks like he's been stealing from the closet of a dwarf used car salesman. And Steve looks like he's wearing William Wallace's hand-me-downs. (His family name is O'Connel, but this is taking Celtic pride a bit far!) Seriously, Will, what were you thinking?

OK, fashion rant over. The children's behavior is disturbing. Not because it's Troubling Unchildlike Behavior. They are acting exactly like children. Like unusually mouthy, disrespectful children who only care about fun to the point that they couldn't care less if their parents are dead. They were no fun anyway. Kirk wants to find out what went wrong, if something is still going wrong. The kids want to go to Markos XII. If they don't get what they want, they won't throw a tantrum or anything....

Oh, yes, this is also known as the episode where Melvin Belli plays the villain.

And the Tropes Shall Lead: