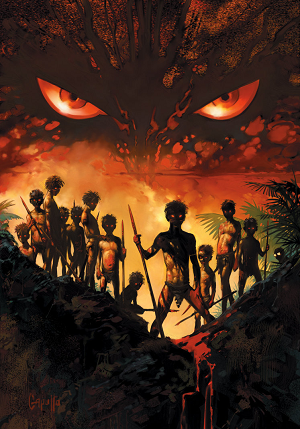 Art by Greg Capullo.
"All the greatest wishes are granted, let us sing, let innocence reign
All the prayers are finally answered, blessed and free of all pain
Towers of fire rise ever higher, magical flags will be unfurled
The power of song, the young are the strong
The night that children rule the world."
— "When Children Rule the World", traditional Christmas carol
Advertisement:

Somehow, the social order has gone all topsy-turvy. Instead of the old having power over the young, the young are free to do as they will, and may even have power over the old. This is pretty much inevitably portrayed as a bad thing, regardless of the state of the world today with the old having power (which of course is exactly the way it was when those who are now old were young). The young in question might attempt to build some sort of new society, or they might degenerate into complete barbarism, or there might be a conflict between the former and the latter. The most famous example is Lord of the Flies, but it's not too uncommon, since it's a useful device to explain why teenagers are going on whirlwind adventures. Teenage Wasteland settings tend to be rather dark, since they often involve children and teenagers fighting for their lives, and quite possibly doing horrible things to each other. Children Are Innocent has no place in a Teenage Wasteland — not all Teens Are Monsters, but in a Teenage Wasteland, you're likely to find at least some that are. In extreme cases, The Apunkalypse may be nigh if the youths run amok or the youths are the only ones left After the End.

Any children and teenagers who hate adults, however, are probably going to be very cheerful. They might have even made their area into this.

There are a few ways this might come to be:

This is not to be confused with There Are No Adults, though types 1 and 2 probably overlap with that.note Type 1 due to setting, and type 2 because the adults are actually gone. Also not A Child Shall Lead Them, in which only one youngster has authority. Depending on the structure of that society, he might be their Royal Brat.

Similar to Promotion to Parent, but on a society-wide scale. Something that is Only Fatal to Adults will pretty much always lead to a Teenage Wasteland. One of these societies at a High School might take the form of an Absurdly Powerful Student Council.

Contrast Childless Dystopia. This trope may heavily overlap with Boarding School of Horrors or Orphanage of Fear.

Not to be confused with Refrain from Assuming, which is about songs with titles that are different from the refrain. For once, the correct name of the song isn't "Teenage Wasteland". Also not to be confused with Anne Tyler's short story of the same name, or Jewel Staite's character's previous project in The L.A. Complex.

Named for a line from a song by The Who, actually called "Baba O'Riley". Not to be confused with the Teenage Wastelands book series, although it does make heavy use of this trope.