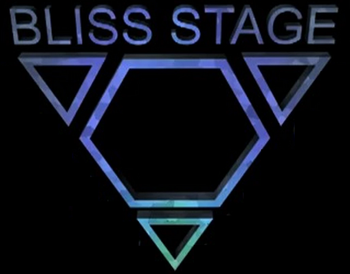 The Bliss Stage logo. It didn't exist, along with any cover art, up until Love is Your Weapon adaptation.
Right now, the moment you began reading this, Humanity is devastated by an alien attack from the edges of our understanding.
It is the first blow of a terrible war. Seven years later, armed with technology you cannot comprehend and can barely operate, you will strike back.
This is how.
—Back cover copy
Advertisement:

Bliss Stage is a tabletop roleplaying game written by PH Lee and produced by TAO Games on May 29, 2011. It is explicitly intended as their homage to Neon Genesis Evangelion and similar works such as Bokurano and RahXephon. It is available at their website, These Are Our Games,

with more information at the blog and fansite Love Is My Weapon.

The moment the game begins, malevolent aliens afflict humanity as a whole with The Bliss, a form of stasis locking the adult population of the world into a sleep with apparently blissful dreams, leaving the child and teenaged survivors in a Crapsack World ravaged by occasional attacks by alien terror drones.

A lone, insomniac, and very probably Ax-Crazy adult manages to rally the local survivors and, to their enduring astonishment, capture one of the drones. They quickly reverse engineer it into the Alien Numina Inversion Machine, or ANIMa, a machine that converts relationships into a source of Psychic Power taking the form of a Humongous Mecha: The deeper the relationship, the more powerful its weapons. The pilot of this ANIMa needs to be properly Anchored (in a manner similar to the duties of the Operators) by a "trained psychologist," usually just someone who they have a crush on.

The game being a Deconstruction of The Power of Love, a pilot's ANIMa is powered by their relationships with other characters, so extremely complicated romantic entanglements just happen in this game. In addition, each pilot accumulates Bliss throughout the game, eventually reaching 108 Bliss, whereupon they either die or leave the game. Endings are often bittersweet or a little more disturbing.

Troper Tsundere Lightning was tapped by the original author for an official Visual Novel adaptation of the game, Bliss Stage: Love Is Your Weapon, which launched a Kickstarter page.