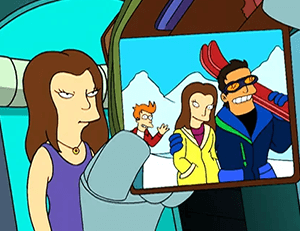 After Fry and Bender get fired for hooking the Planet Express building to the ship and flying all around the world (along with Leela, who should have stopped them), they get jobs at Applied Cryogenics (at least Fry and Bender do. Leela gets a job as a pizza delivery girl), where Fry discovers that his girlfriend Michelle froze herself as well.