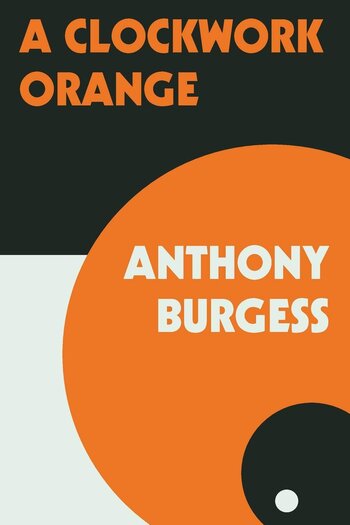 "A man who cannot choose ceases to be a man"
— F. Alexander, Part 3, Chapter 4
Advertisement:

What's it gonna be then, eh?

A Clockwork Orange is a 1962 novella by Anthony Burgess. In a dystopic future where street crime is rampant and youths are uncontrollable, teenage sociopath Alex and his friends prowl the night spreading terror and destruction wherever they go. By daybreak, Alex returns home to his vapid parents, who turn a blind eye to his activities, and enjoys his second favorite thing in the world: Classical Music.

Things are going swimmingly for Alex until his 'droogs' begins to chafe under his leadership. Alex is still content with pointless violence, but the gang is starting to grow up and think about making a profit. After a fight for supremacy, he reasserts himself as leader, but bows to the gang's interest in robbing a wealthy widow's house. Alex takes the lead in the robbery, but the widow discovers him, leading to a fight. As the gang flees, they betray Alex and leave him for the police to apprehend. At the station, the police inform Alex that the widow died of her injuries, making him a murderer. He is quickly convicted and sentenced to a lengthy prison term.

In prison, Alex settles into his old habits, pretending to be a model prisoner while plotting his return to violence. When he discovers that the government is planning to test an experimental treatment on a prisoner in exchange for freedom, Alex soon inadvertently kills an inmate, making him the first patient to be subjected. The prison chaplain warns him not to think of this as freedom, claiming that no external force can turn a man good, but Alex is only interested in getting free and returning to his murderous ways.

The treatment turns out to be a nightmare. Alex is continuously injected with drugs that make him sick while watching scenes of violence in a theater. His mind soon associates violence with the sickness, causing a Pavlovian response. Particularly abhorrent to him is the classical music on the soundtrack, which he inadvertently relates with the sickness as well. When the procedure is complete, Alex cannot even think about violence or rape without suffering from crippling illness, rendering him harmless to society. He also can't listen to his favorite music without intense pain.

Alex's case is controversial. His own prison chaplain argues against the procedure, and other critics agree that removing Alex's capacity for moral choice has not turned him good, but reduced him into a programmable machine. The government, however, is only interested in the bottom line of cutting down crime. They release Alex into the world, still evil to his core, but without the ability to defend himself against all his enemies and former victims. His fate ultimately proves the self-defeating nature of the government's program.

It was adapted into a 1971 film by Stanley Kubrick. For tropes specific to the movie, see here.