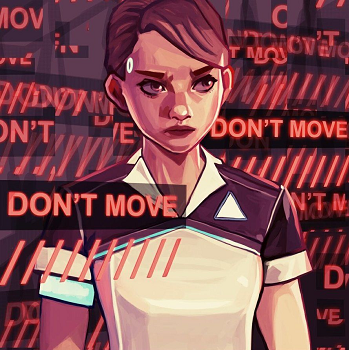 A gadget that firmly attaches itself to a character, and thereby attaches said character's behavior in service to the plot. Implicit in the Restraining Bolt are both its unremovability and the desire of the "bolt-ee" to remove it posthaste.

A Restraining Bolt usually has an ethos distinctly different from that of its carrier, and the ability to impose that ethos on him when they have a difference of opinion. If the difference isn't too great, or is one mainly of magnitude rather than type, the Bolt and its "owner" can sometimes come to some manner of compromise. Such compromises, though, are never sure things. In science fiction, it's fairly common for the Mascot or Team Pet to in fact be an example of the monsters that the team usually fight, with a Restraining Bolt attached as a means of taming them.

In stories that employ Functional Magic, instead of a gadget a person may be restrained with a "geas"-a magical compulsion. A particularly strong or willful Empathic Weapon can act as a Restraining Bolt on its user.

Bolts are not limited to any given morality or side, and seldom are the ethical implications of these devices explored. At least, they aren't so long as the good guys are the only ones using them.

If the Bolt exists just to power the character up when it's removed, it's I Am Not Left-Handed.

One common example of a Restraining Bolt is I Cannot Self-Terminate. A common technological equivalent is the Morality Chip. Compare with Power Limiter. Also see Explosive Leash, Shock Collar, Power Nullifier and Supernormal Bindings. An Obstructive Code of Conduct is a voluntary Restraining Bolt. For gadgets that completely control a person's actions, see Mind-Control Device.

Named for the droid control devices from the Star Wars movies.