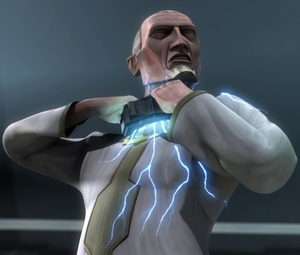 "Note the Deadlock collar securely fastened around your neck. This collar cannot be broken or removed. Should you stray into any restricted area, the collar will administer an extremely painful shock."
— Gleeman Vox to Ratchet, Ratchet: Deadlocked
Advertisement:

The concept of a Shock Collar is simple: A character is forced to wear a Slave Collar or torc and when they do something undesirable, as designated by whomever put the collar on them, they are administered a shock. Such things exist in real life for dogs, but it is more likely that the trope is in use as a way to replicate the iron slave collar with a Speculative Fiction twist.

How it actually works is nearly always undefined. It's a metal ring, it hurts, end of statement. Sometimes it is electricity for some Electric Torture, sometimes it's a generic Agony Beam generated by some alien technobabble. It makes a good Restraining Bolt for the plot, you can even spin some plot lines out of how to get it off (especially if it's designed to go off automatically if tampered with), and sometimes it'll have the added feature of being able to be pumped up to deadly levels so that it can also be, effectively, an Explosive Leash. On other occasions, expect some fun with Pavlovian conditioning.

The Deadlock Collars are designed to keep the DreadZone contestants "cooperative." They can electrically torture the wearers and could even kill them.

The Deadlock Collars are designed to keep the DreadZone contestants "cooperative." They can electrically torture the wearers and could even kill them.