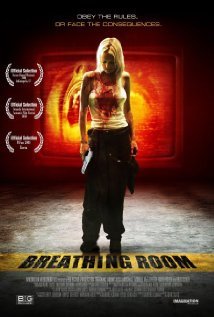 Breathing Room aka A Room to Breathe, is a 2008 Horror Film written and directed by John Suits and Gabriel Cowan. A woman named Tonya Mane wakes up naked and confused in a stark room with thirteen other people. She learns that she and the others are part of a deadly game. They are all fitted with collars that can deliver a deadly electric shock. They are told that the goal of the game is to figure out why they are there, and that "only those without collars can break the rules". The residents of the room soon find out that they are under surveillance and that there are killers in their midst.