Literature / The Boy in the Striped Pyjamas 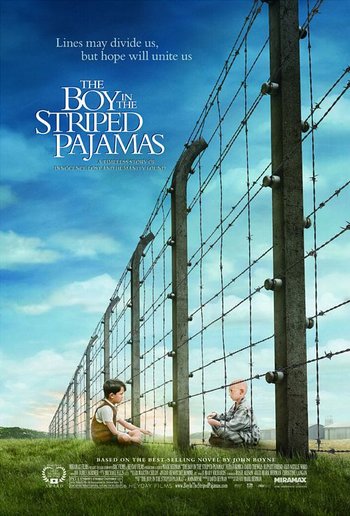 "We're not supposed to be friends, you and me. We're meant to be enemies. Did you know that?"
Bruno: There is such thing as a nice Jew, though, isn't there?
Herr Liszt: I think, Bruno, if you ever found a nice Jew, you would be the best explorer in the world.
Advertisement:

The Boy in the Striped Pyjamas is a 2006 book by John Boyne about a young boy of nine named Bruno, who loved to play with his friends and go to school, among other fun things to do in Germany in the 1940s. Yeah, those 1940s. That is, until his father's job forces his family to move to Poland, particularly to an odd camp called "Out With", which consists of a small house with an odd fence beside it. His older sister, Gretel, informs him that it will only be "for the foreseeable future", which she figures to be about two weeks.

However, things do not go as quickly as they'd hoped. So Bruno takes a look around and peers out a window to see what is beyond the fence. What he sees is, to him, amazing- so many people, old men, young men, boys of all ages, all wearing the same striped pyjamas! He asks Gretel about them, and finds out that they're called "Jews", which according to Gretel aren't really people.

Later on, Bruno decides to investigate for himself. While walking around, he meets a young boy about his age named Shmuel. After talking for a while, they forge an odd sort of a friendship, meeting as often as they can at the one spot on the fence.

The book was adapted into a film starring Asa Butterfield, Vera Farmiga and David Thewlis in 2008.

The Boy in the Striped Pyjamas provides examples of: