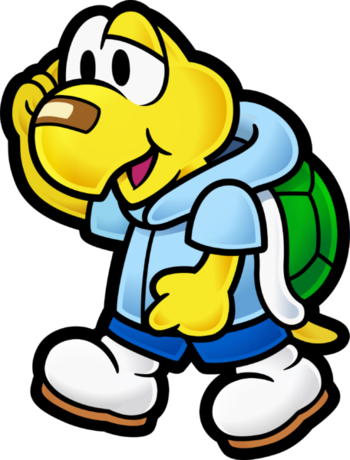 "Yeah, I have no idea how I managed to put this hoodie on either."
Advertisement:

When a shell-clad anthropomophic animal, such as a turtle or armadillo, is seen wearing human clothing on their upper body, it will often inexplicably cover only the front while still leaving the shell on the back exposed like a backpack.

Realistically, this should not be possible, as said shells are attached to an animal's body; even when Removable Shell is in effect for turtles, it should remain impossible unless the shell itself is able to come apart. Either that or the clothing on chelonians (turtles, tortoises, and terrapins) and armadillos would open on the back like a hospital gown. Sometimes the clothing may even inexplicably disappear if the character fully retreats into their shell.

This may also apply to the quills or spines of animals like the common hedgehogs and porcupines and the seldomly seen tenrecs and echidnas.

A possible explanation for this may be that shells and quills are considered iconic attributes of these animals, and thus it would "look wrong" to the viewer if they were not visible, or else that without the shell being visible, the viewer may not realize what type animal the character is supposed to be.

A subtrope to Appropriate Animal Attire.