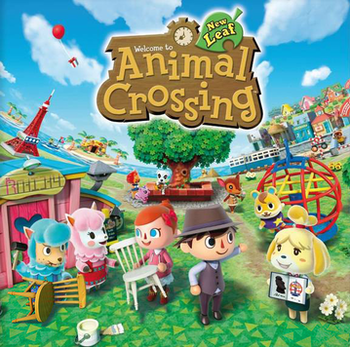 Be the mayor, turn over a New Leaf.
Advertisement:

Animal Crossing: New Leaf (Tobidase Doubutsu no Mori) is the fourth mainline installment of the Animal Crossing series. It was released on the Nintendo 3DS on November 8, 2012 in Japan, with a June 2013 western release following suit.

You move to a new town but are mistaken for the new mayor, and after planting the seed of the soon-to-blossom town tree, you are now in charge of town responsibilities. As the de-facto town mayor, the player has various unique abilities and interactions not found in the other previous entries, such as building Public Work Projects to customize your town with and setting public ordinances (such as letting plants grow for an extended period of not watering them). This is on top of the other gameplay aspects carried over from the previous games in the series; building bridges with (and for) your kooky villagers, sending them gifts, competing in the fishing tourney, picking fruit, customizing your house, and more.

New Leaf was the series' most revolutionary title since 2005's Animal Crossing: Wild World. It boasts a revised art-style, many new characters, and significant changes to the mechanics, all of which introduced many newcomers to the franchise, launching it into mainstream success. Because of this, New Leaf is the second-best selling game in the series, moving 13.4 million units in its lifetime.note It was beaten by the following game, Animal Crossing: New Horizons, though its numbers are an order of magnitude larger due to the releasing right when lockdowns started for the COVID-19 Pandemic; it currently stands at shy of 40 million units.

To everyone's surprise, an update for the game was released in November 2016, titled Animal Crossing: New Leaf: Welcome amiibo (Tobidase Doubutsu no Mori amiibo+), or the "Welcome amiibo" update for short. Newer physical copies of New Leaf have the update built-in, while people who already own the base game can update their copy for free. The update, as the name suggests, adds compatibility with amiibo, both the existing Animal Crossing line and select amiibo from other series. There are also various improvements to the gameplay, like being able to sit on rocks and shake trees without putting away your tool.

In a first for the franchise, there was no direct follow-up for the concurrent home console (the Wii U), so the console versions skipped a generation from the Wii's Animal Crossing: City Folk to the Nintendo Switch's Animal Crossing: New Horizons. The Welcome amiibo update is the closest New Leaf had to a traditional follow-up.