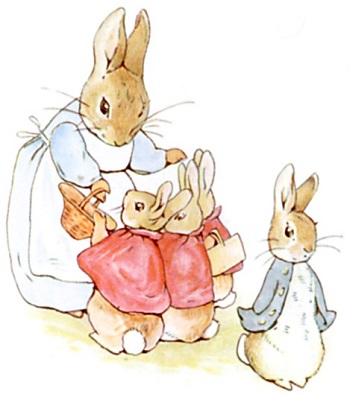 Adults are dressed, youngsters go bottomless...
Phoenix: I can't walk into court with a ripped suit; I'll look so unprofessional...
Pinkie: You could just go naked like me.
Phoenix: AGH!! ARE YOU CRAZY!? I'm not gonna show up in court naked!
Pinkie: Why not? Everypony else does it!
— Turnabout Storm
Advertisement:

In Real Life, we humans are basically the only species uncomfortable with public nudity.note Though the extent varies massively depending on the culture and time period Other creatures in the worldnote with the arguable exceptions of hermit crabs, caddisfly larvae, and decorator crabs don't share this taboo, and spend the entirety of their lives without ever covering themselves in a shred of clothing. So when a work of fiction uses animals for its core cast of thinking, personified characters, what's an author to do about their underlying, well, nudity?

Now is an important time to define the term "nudity": When we say that a person is "naked", we usually use it in a social context, implying that they should Please Put Some Clothes On. As Fully-Clothed Nudity shows, we can consider a person "naked" even if they actually have some kind of clothes on. Even though the standard for acceptable human attire can vary with each culture, this isn't a standard we hold animals to; we just don't view their nudity as being so objectionable. Maybe it's the coat of fur (or feathers) that partially obscures their genitals already; maybe it's the four-legged posture that makes their unmentionables less visible than those of a bipedal human (especially from the front). So while we may not particularly want to be looking at an animal's family jewels, the omission of them in art is (usually) much less noticeable than Barbie Doll Anatomy. note Male rats and mice have large scrotums that are very hard not to notice.

This gets weird with a Half-Dressed Cartoon Animal, since they often do have a concept of nakedness. But even that is sort of a mock nakedness, since it doesn't make the viewers feel uncomfortable the same way as human nudity would in many cultures.

It can also be due to Conservation of Detail by the author, especially in written media where they have more important things to discuss than informing the audience whether there's "something" visible between an animal's hind legs or under his/her tail. But visual media needs frequent, consistent depictions of the characters (human or otherwise) so whether or not an animal is "anatomically correct" can be an important stylistic decision for the artist: Executives and Moral Guardians may object to such anatomical features, but on the other hand, an artist may prefer to show their work rather than deal with complaints that their Animals Lack Attributes.

But things start to get weird when throwing anthropomorphism into the mix. Of course, a Talking Animal (speech-impaired or otherwise) and their relatives like the Nearly Normal Animal and Partially Civilized Animal, being rather normal animals otherwise, can easily get by with their lack of pants or shirt ever getting questioned, but it gets weirder when talking about animals that are more or less treated or act like people. A Civilized Animal and perhaps even Funny Animals can still get away with being naked due to them still having a animalistic-shape; Beast Men and Humanoid Female Animals, however, are essentially humans with some animal features added on, so it might be more than a little awkward to have them going about nude.

Sister trope to Human Furniture Is a Pain in the Tail.

When it is deemed "necessary" to clothe animals in some form of attire, artists have a wide range of options at their disposal:

As the nonhuman equivalent of wearing Diamonds in the Buff, the individual is still essentially 'naked' underneath whatever pelt or plumage they naturally possess; but their Amplified Animal Aptitude is conveyed through the use of jewelry or other worn accessories. (Ring Around the Collar and White Gloves can also count.) Similarly, they may be wearing only the equivalent of a fig-leaf or Loincloth — the bare minimum necessary to preserve a sense of modesty for the audience if they are a Beast Man. (This is also a popular visual motif for depicting characters as 'exotic' or 'native' in origin.)

One of the most common depictions in Western Animation, the individual is wearing a partial set of clothing — usually just a shirt or coat to cover their upper body while their bottoms, legs, and feet remain bare (unless they wear shoes). Going "topless" with a skirt or pants but no shirt is also an option, like the animal equivalent of a Walking Shirtless Scene.

Extending "half-dressed" to "mostly-dressed" results in this: The animal wears a full set of clothing, except retaining their unshod feet. Spat-wearing, but otherwise fully-dressed animals also count as barefoot cartoon animals. When this is the status quo in a setting, the exception becomes known as The One Who Wears Shoes.

This is an animal who wears a full set of clothing including footwear (socks and/or shoes). Often averted because a full outfit with shoes and/or socks has a high chance of obscuring what species a particular animal character is. Funny Animals who typically have this form of dress, especially the head-to-toe variant, can be a little unsettling when shown completely naked, but it's not as unsettling as a nude Beast Man.
Animal Attire Convention Tropes

The One Who Wears Shoes

Another convention applied largely to anthropomorphized animals (Funny and Civilized) is a gender-based Double Standard regarding who is allowed to wear what kinds of clothes; the Accessory-Wearing Cartoon Animal and Half-Dressed Cartoon Animal tropes are only ever applied to males, while females adhere to a higher standard of dress than the opposite gender.

One convention applied to animals, usually Funny Animals and Civilized Animals, is an age-based Double Standard in which either young animals dress less fully than the adult animals in the work or the young animals go au naturel and the adults wear clothing, whether accessory wearing, half-dressed, or fully dressed. Sometimes inverted, like with a baby animal wearing a diaper and an adult animal wearing nothing.

This is the tendency for the sleepwear and swimwear of typically completely naked, mostly naked, or partially dressed Funny Animals and Civilized Animals to not follow the rules of their everyday dress (or lack of dress). Instead, they appear more fully dressed in their sleepwear and swimwear than in their normal outfits, intended to be more relatable for human viewers.

This is a tendency for a typically pantsless, mostly naked, or completely naked animal character to wrap a towel around his/her waist when he/she gets out of the shower or bathtub.

For winter weather, a naked or partially clothed Funny Animal or Civilized Animal would often dress with a hat, scarf, and jacket, but without pants or shoes/boots. Another variant of this includes shoes or boots, but they still aren’t wearing any pants. They would seem to be dressed for the weather, but logically, they should still be cold unless they are arctic, Antarctic, or similarly frigid weather animals because of the lack of shoes/boots and pants.

This is when a Half-Dressed Cartoon Animal or, in a few cases, an Accessory-Wearing Cartoon Animal reacts to his or her state of undress protect his or her modesty when he or she is spotted nearly or completely naked.

Otherwise or Normally Clothed Animal Not Embarrassed by State of Undress

This is when an otherwise clothed animal, whether fully, mostly, or partly clothed or accessory-wearing animal loses part, most, or all his/her clothes or has a wardrobe malfunction, but doesn't act denuded to his/her state of undress or nudity. They might try to find their lost or stolen clothes and get them back, but they don't seem to care about their state of undress.
Animal Attire Type Tropes

A subtrope of Nude-Colored Clothes in which the pants worn by pantsless looking cartoon animals of the Civilized Animal, Funny Animal, or Beast Man vein that look like naked animal legs. Used as a common subversion of the pantsless side of the Half-Dressed Cartoon Animal trope.

When a shelled animal, such as a turtle or armadillo, or a quilled animal like a porcupine, echidna, or hedgehog, is seen wearing human clothing on their upper body that covers only the front and leaves the shell or quills on the back unclothed. Logically, the garment would be open to back like a hospital gown.

This is where because their wings can't fit normal shirt, jacket, and coat sleeves, bird, bat, and similarly winged characters wear sleeved shirts with large or huge sleeves to fit their wings.

This is where a character's (not fingerless) gloves or (more rarely) socks have slits for claws or talons to stick through. This is rather logical for animals with long claws.

This is where an animal without pinnae (ear flaps) wears earrings on their cheeks.
Natural Body Parts as Articles of Clothing Tropes

A manner of playing the subject of an animal's "fur coat," feathers (if a bird), or scales for laughs is to treat it as an actual article of clothing. Expect to see Goofy Print Underwear and/or a reaction from the character (see above point) to protect his or her modesty if he or she should be suddenly denuded.

The turtle and other shelled or carapaced creature equivalent of Fur Is Clothing.

One manner of presenting a child-like demeanor for young animals born from eggs is to preserve their modesty using part of their egg's shell.

Ears as a Hat

This is when an animal with pinnae (outer ear flaps) doffs his/her ears as if they were a hat.

Examples That Do Not Fit the Subtropes: