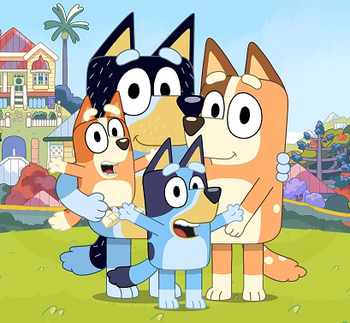 For real life? note The Heeler family (clockwise from top, Bandit, Chili, Bluey, Bingo)
"Flowers may bloom again, but a person never has the chance to be young again."
— Bandit, 'Takeaway'
Advertisement:

Bluey is an Australian animated series aimed at families, about a Blue Heeler puppy and her family. The titular Bluey is (in human terms) seven years old; her sister Bingo is four and her parents are Dad (Bandit), an archaeologist and stay-at-home dad, and Mum (Chilli), who works at the airport and plays hockey. Each episode shows how the kids see games and family outings as adventures, and how gameplay is used to cope with everyday issues. Occasionally the rest of their family or their friends might take the spotlight.

Bluey is made and set in Brisbane, the capital city of Queensland. The show is produced by Ludo Studio for The ABC and BBC Worldwide, and was first broadcast in Australia in late 2018 on ABC Kids. A broadcast in the United Kingdom on CBeebies followed, and in 2019, Ludo announced that Bluey would be aired in the United States on Disney Junior, as well as being available to stream on Disney+. These international airings come at the studio's condition that the show cannot be shown overseas in the English language unless the characters keep their Australian accents (naturally, this rule does not apply to foreign-language dubs). The second season of the series premiered in Australia in early 2020, with a third season airing as of late 2021. The first season of the show was added to BBC Player under the CBeebies section in Malaysia and Singapore in 2021, keeping the Australian accents as required.

Not to be confused with the 1970s Australian cop show of the same name.

"This episode of Bluey is called 'TROPES'":

A downplayed example. Bingo has a thing whenever she puts on a animal-theme onesie, that cause her to be come whatever animal it is. As shown when she turns into a cheetah shortly after putting on her gift from Brandy.

Example of:
Becoming the Costume

A downplayed example. Bingo has a thing whenever she puts on a animal-theme onesie, that cause her to be come whatever animal it is. As shown when she turns into a cheetah shortly after putting on her gift from Brandy.