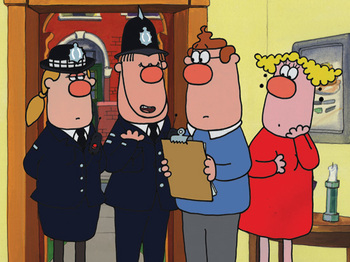 Bob and Margaret is a British/Canadian animated sitcom produced by Nelvana in association with Channel 4 and Global Television Network. It was created by the husband-and-wife animation duo of David Fine and Alison Snowden, being based on their Academy Award-winning 1993 National Film Board of Canada short Bob's Birthday.

The show focuses on Bob and Margaret Fish, a middle-aged middle class couple living in Balham in South London. With the show being a very grounded series, Bob and Margaret live very ordinary lives. Bob is a dentist and Margaret is a chiropodist; they have no children but two dogs named William and Elizabeth. They deal with mundane issues very typical for a couple in their 40s, like midlife crises, shopping problems, annoying friends or neighbors, and family members who seem to be living much more successful lives than them.

In the show's third season, Bob and Margaret moved to Toronto, a directional change necessitated by the Canadian content laws that had funded the show's production requiring the show to have a Canadian setting in order to continue having the show produced. Nevertheless, the change opened up a wider range of stories for the writers to work with, as Bob and Margaret struggled with adapting to Canadian culture.

Bob and Margaret ran for 4 seasons and 52 episodes from 1998 to 2001. While the series has largely faded into obscurity, even in its home countries, Bob and Margaret stands out as one of the few Canadian TV shows (particularly among adult-oriented animated shows) to ever have regular American exposure, where it was broadcast on Comedy Central (and later Showtime). It also became the highest rated Canadian animated series ever when it first aired on Global during its primetime block. Additionally, its grounded and relatable tone and comedy have earned it a small cult following among British and Canadian TV viewers who fondly remember the series, thanks partially to continued reruns of the show for several years after it ended.

Nelvana uploaded the first two seasons of the show onto their Retro Rerun channel in 2021.