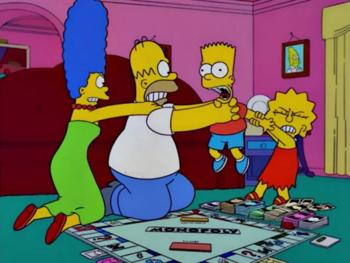 Monopoly: Bringing families together since 1935.
Officer Eddie: Another case of Monopoly-related violence, Chief.
Chief Wiggum: (Tsk, tsk, tsk) How do those Parker Brothers sleep at night?
— The Simpsons
Advertisement:

It's game night! Bring your favorite Board Game or Tabletop Game. Bring a Card Game. You can even bring your video game system for some competitive multiplayer action. Or if you don't have any of those things, you can always play charades. Sure, there might be some competitiveness, but it's all about having fun with your friends or family. Have some laughs and make some fond memories. Fun will be had, right? Well, no...

No one is having fun here. Instead, there might be severed friendships or broken families. Things might start off pretty well, but competition has a way of bringing out the worst in people. Someone may or may not cheat. There could be Sore Losers that have to deal with Unsportsmanlike Gloating from the winner(s). And if these games are played in teams, one of them might have a Spanner in the Works. There can even be a disagreement about the rules or instructions. Whatever happens, expect cards and boards to be thrown or tables to be flipped over. Televisions may even get broken. Inevitably, things will end with the players mad at each other in some way — and in extreme cases, friendships and family relationships may suffer irreversible damage. "It's only a game" indeed.

Note that despite what the title says, this doesn't have to specifically occur at night — it can happen any time of day. It can be one-on-one or even a small group that's involved. But it always has to end badly, with people at each others' throats.

A Sub-Trope to Friendship-Straining Competition. Can overlap with Gambling Brawl if the games themselves are played with money on the line.

In-Universe Examples Only. There are plenty of memes and stories about how games can ruin relationships; this is just focusing on fictional examples.

Cindy Blog's second single recounts how she ended up in bed with her ex-boyfriend after an argument.

Example of:
Sex with the Ex

Cindy Blog's second single recounts how she ended up in bed with her ex-boyfriend after an argument.