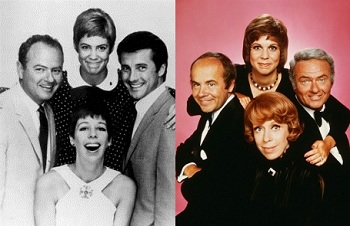 "Let's bump up the lights..."
"I'm so glad we had this time together
Just to have a laugh or sing a song
Seems we just get started and before you know it
Comes the time we have to say, 'So long.'"
Advertisement:

A hit Variety Show starring (who else?) Carol Burnett, which aired for 11 seasons (1967–78) on CBS. The show followed a simple format of weekly guest stars, sketch comedy, movie and TV parodies, and musical numbers. What set it apart was how off-the-wall the cast and writers would take things. Basically anything went, as long as it was funny (and could air on TV, of course). Many also consider it to be the first comedic variety series centered around a woman.

The regular cast initially consisted of Burnett, Harvey Korman, Vicki Lawrence, and Lyle Waggoner; Tim Conway (who'd appeared numerous times as a guest) succeeded Waggoner in Season 8, while Dick Van Dyke replaced Korman for the 11th and final season. Jim Nabors (whom Burnett regarded as her "lucky charm") appeared as the guest for the first episode of each and every season. One of the show's more popular recurring sketches spun off into the sitcom Mama's Family.

Let's bump up the tropes: