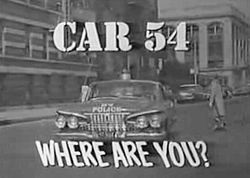 "There's a holdup in the Bronx
Brooklyn's broken out in fights
There's a traffic jam in Harlem
That's backed up to Jackson Heights
There's a scout troop short a child
Khrushchev's due at Idlewild
Car 54, where are you?"
Advertisement:

Car 54, Where Are You? is a police Sitcom created by Nat Hiken (whose previous credits included The Phil Silvers Show), which aired on NBC for two seasons (1961–63).

NYPD Officer Gunther Toody (Joe E. Ross) is a short, stocky, dim-witted, married cop who is assigned to Patrol Car 54 in the (fictional) 53rd precinct in the Bronx with the taller, thinner, smarter, unmarried Officer Francis Muldoon (Fred Gwynne). Episodes revolve around the comedic tension generated by Toody and Muldoon's opposite personalities, their unsuccessful attempts to "get tough" and carry out their police duties despite both being too warm-hearted to have the steel nerves they think they require, and Toody's lack of intelligence but abundance of enthusiasm and/or stubbornness proving either an asset or a liability depending on the situation.