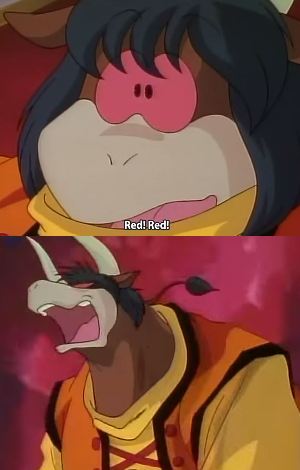 Even in Funny Animals, Animal Stereotypes will bring out the beast within.
"I'll put on a red sweatsuit, stand in the middle of the ring, let some bulls out, and see if they charge me."
— Tory, Mythbustersnote Because the Mythbusters aren't Too Dumb to Live, the actual test involved foam mannequins.
Advertisement:

It is almost inevitable that whenever you see a bull in frame, sooner or later that bull will see red. Almost always, this bull will see it on the person of the protagonist. And absolutely always, the mere sight of red will drive the bull into a frenzy. No exceptions. Bull sees red, you better start runnin'.

This is more popular in cartoons where the bull's emotions and behaviours can be drawn (gusts of breath snorted from the nose, red filling up the eyes etc.) and you don't have to pay for the pleasure of an irritated bull in your studio.

This idea was started by bullfights in Spain, Mexico, and other Spanish-speaking countries, where a matador would wave a large red cape to get a bull to charge at him. In real life, it's not the color of the cape the matador's waving that makes the bull charge; it's the fact that the matador is waving the cape at all. In fact, the cape being universally portrayed as red in the first place is actually a Dead Horse Trope by itself: modern bullfighting is mostly done with a fuchsia and yellow cape (called capote), and they only switch to a red one (called muleta) for the last third of the round.

The fact that the color is irrelevant was proven long before the MythBusters tackled it on their show. Characters may also occasionally mention that bulls are colorblind, but this is also untrue (though the range of colors they can see is narrower than a human's). As this awareness has grown over time, expect to see many deconstructions and aversions, with the characters pointing out these significant bits of information.

This usually only applies to regular bulls, but parodies and comedic versions may also extend it to bovine Funny Animals and to fantastical bull-like creatures such as minotaurs.

The actual reason for the use of reddish/pinkish colors in Real Life bullfighting is to mask the bull's blood, as covered by Bring My Red Jacket, for the benefit of the audience (bright red really catches the eye compared to, say, navy blue), and for the psychological effect (red being more exciting to look at versus, say, pastel green). See also Red Is Violent and Brutish Bulls.