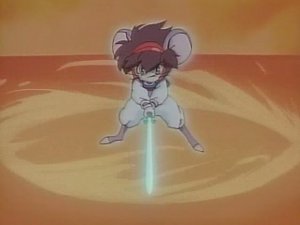 When your Battle Aura is sufficiently charged and you're preparing to call your attack, or if you're a mage and you're invoking a particularly complicated spell, a wind will almost always whip around your feet, kicking up little wave-like peaks of dust in a perfect circle around you, possibly flaring out the hem of your Badass Longcoat or Badass Cape, if you have one. Female invokers of this trope with sufficiently long hair will also have it billow and lift from the wind, but it'll rarely ever do so unfashionably or inconveniently (like obstructing their face).

If the writers have to surpass whatever power is responsible for swirling dust, they'll frequently resort to a Chunky Updraft. The guiding principle behind both of these is Sphere of Power. Not to be confused with Smoke Shield, when large amounts of dust shield attackers. May also occasionally manifest as trail from the use of Super Speed.