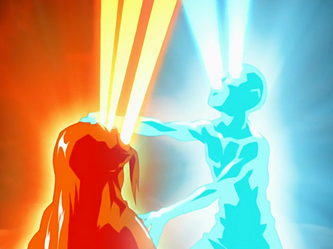 Aang defeats Ozai by taking away his firebending abilities.
"I can't believe a year ago I was frozen in a block of ice. The world is so different now."
"And it's gonna be even more different. We'll rebuild it together."

Ozai accidentally causes Aang to enter the mighty Avatar State. The Order of the White Lotus successfully liberates Ba Sing Se, while Sokka, Suki and Toph disable all of the Airships. Katara freezes and chains Azula down, triggering a psychotic breakdown in Azula, then uses her exceptionally strong healing abilities to revive a severely wounded Zuko. Aang easily overwhelms Ozai, yet still refuses to kill him.

Aang uses his knowledge from the lion-turtle-a newly acquired bending ability called energybending-to permanently strip Ozai of his firebending abilities, defeating the Phoenix King without taking his life. Newly appointed Fire Lord Zuko declares the war over, and Aang and his friends celebrate together at Iroh's tea shop in Ba Sing Se. Zuko and Mai reconcile officially, and Zuko confronts his father, angrily asking where his mother, Ursa, is being kept. Aang and Katara share a loving hug and kiss passionately before the sunset.

Azula suffers a complete psychological breakdown after being defeated by Zuko and Katara.

Azula suffers a complete psychological breakdown after being defeated by Zuko and Katara.