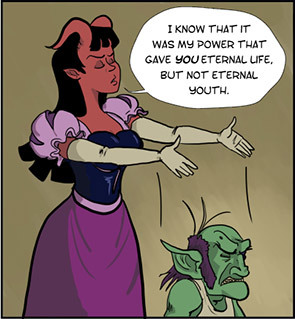 "When 900 years you reach, look as good, you will not."
— Yoda, Return of the Jedi
Advertisement:

In fiction, immortality is a crapshoot. Some think that it is great and some think that it's horrible. This trope is the happy medium between the angst-free, eternally youthful immortal, and the immortal who might welcome death.

The character keeps his or her health with immortality, but not youth. As a result, these characters are forever stuck at the apparent age when most mortals' health finally begins to succumb to the ravages of old age, but, unlike the Age Without Youth character, they usually remain vigorous, healthy, "active seniors," and are usually still at least somewhat attractive.

To be this trope a character must:

The character usually fits one of the following types.

The Greek God: A Heroic Build that would be more appropriate on a character one-half to one-quarter his apparent age, lots of hair, Super Strength.

The Jolly Old Elf: Relatively short, heavyset with a waistline greater than his height, huge beard if male.

The Wizard: a thin, frail, elderly Squishy Wizard, usually wearing a Cool Hat. If male, he will almost invariably have a slender beard that reaches nearly to his feet.

The Yoda: Small and frail, little if any hair.

The Elderly Child: A mix of childlike and elderly characteristics, such as grey hair and a baby's face.

Usually, the character also will:

It may overlap with The Older Immortal. They are usually also Older Than They Look. Compare Stronger with Age if their physical ability keeps pace with their age, despite their appearance.

open/close all folders
The Greek God

The Elderly Child
Anime and Manga