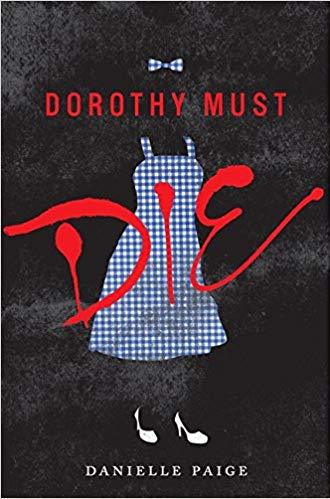 Dorothy Must Die is a 2014 young adult book and the debut novel of Danielle Paige.

Amy Gumm is an intelligent young teen coming from a broken home, and is taken to the wonderful land of Oz in a tornado. However, she isn't in the Oz that she remembers from the movie and the books - and the Dorothy she meets is certainly not the Dorothy that she is familiar with. She is rescued from a Fate Worse than Death and then joins the Order of the Wicked who tells her their one goal: Dorothy Must Die.

There are three sequels: The Wicked Will Rise (2015), Yellow Brick War (2016), and The End of Oz (2017). A series of prequels and midquels building up to the first book have been published too, focusing on other characters including Dorothy, the Wizard, Jellia Jamb, the Scarecrow, Tin Man, and the Cowardly Lion. All the digital novellas can be purchased alongside the first two books via e-reader bookstores.

Dorothy Must Die includes examples of: