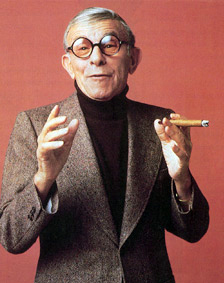 An honored comedian who became even more famous as the original Hollywood Cool Old Guy.

George Burns (born Nathan Birnbaum; January 20, 1896 – March 9, 1996) played in Vaudeville and eventually started a double act with a young woman, Gracie Allen. However, Burns soon found that while she was his comic foil, she was getting more laughs with her comments than his best jokes. Being humble enough to bow to reality, Burns flipped the act and became the Straight Man and Grace Allen carried the heavy comedic lifting as the team, Burns and Allen, went on to great success on stage, radio and television. (Burns: "Twenty years ago I made an investment of $2.00 that has paid off a million times over in the years since. I bought a marriage license.")

Part of what helped make them so big in their early years was that they acquired a good reputation as collectively The Reliable One as a disappointment act, an act show producers could call upon as a last-minute replacement when other another act pulled a no-show for whatever reason. Obviously, that reliable pair proved so good and popular an act by themselves that eventually they stopped doing that since those same producers would simply have them headline the show and they were subsequently too busy to substitute for anyone.

The basic act was Gracie seemingly playing The Ditz while Burns regularly broke the Fourth Wall with side glances and comments to the audience. However, Allen's character was somewhat different in that she wasn't so much stupid, she just saw the world in such an idiosyncratic way that no one but George could function effectively around her. When TV shifted to color, Allen retired; her eyes had different colored irises, and she felt that it was too distracting/embarrassing to work in color. (She also had a mild heart attack at the time, which may have been the real reason.) The classic "Say good night, Gracie" "Good night, Gracie" was never actually a part of the act, but Burns did say he wished he'd come up with it.

After Allen died in 1964, Burns worked on a lower level until 1975, when he got a de facto starring role in The Sunshine Boys as a old comedian coming out of retirement to work for a partner even though they can't stand each other. That role got him the Academy Award for Best Supporting Actor, which made him the oldest male winner in the Actor division (he was 80) until Christopher Plummer won at age 82.

After that splash, Burns reshaped his image as a beloved old comedian who could hold the spotlight against any young rival with ease. He further buttressed his fame with his Oh, God! film series where his playing of God further played on his incredible longevity as a performer. Burns also released three Country Music albums on Mercury Records, the first of which accounted for the unexpected radio hit "I Wish I Was Eighteen Again".

Until his death a few months after hitting 100, Burns had a secure public image as a pop star who had been around forever.

George Burns finds it refreshing to hear a joke that's older than him.

George Burns finds it refreshing to hear a joke that's older than him.