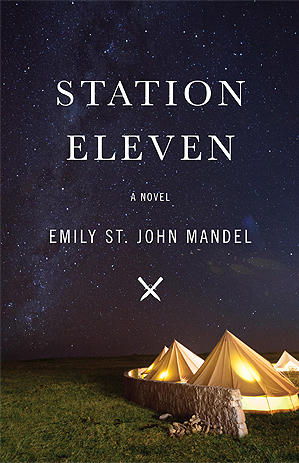 Station Eleven is a Post Apocalyptic novel written by Emily St. John Mandel and published in 2014. In the novel, a pandemic known as the "Georgia Flu" wipes out somewhere north of 99% of human life on Earth, ending civilization as we know it. Twenty years later, a band of survivors known as the "Traveling Symphony" have come together to preserve what remains of the world's music and theater, and perform it in towns that have begun to resettle the Midwestern American landscape.

Kirsten Raymonde was eight years old when she landed her first theatrical role in a Toronto performance of King Lear, starring famed actor Arthur Leander in the title role. The night the Georgia Flu arrived in the city, Arthur died of a sudden heart attack while onstage. Kirsten survived the deadly disease, wandering throughout what was once Michigan for some time before joining the Traveling Symphony at fifteen, inspired by her memories of Arthur.

Twenty years after the pandemic, several of her fellow actors and musicians from the Traveling Symphony disappear near the town of St. Deborah by the Water, where a violent, mysterious prophet and his followers have set up camp in the two years since the Symphony last passed through. In an attempt to find and rescue her friends, who Kirsten believes may have fled to a mysterious "Museum of Civilization", Kirsten is separated from the Symphony, and must survive the wilderness and the new cultists in order to save her friends and herself.

The novel also uses flashbacks to describe life before the pandemic, detailing the lives of those close to Arthur Leander. Particular attention is given to Arthur's first wife Miranda, the author of a graphic novel series called "Station Eleven" (which has found its way into Kirsten's hands so many years later); Clark, Arthur's oldest friend; and Jeevan, a paparazzo-turned-paramedic who faces his own struggle to survive and find fulfillment in a radically changed world.