Every Scar Has a Story 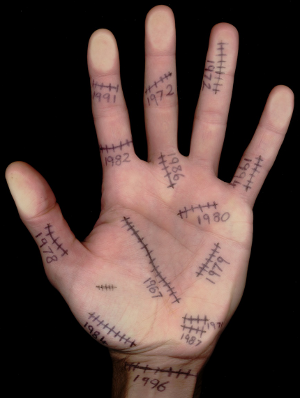 "Well, you look nervous. Is it the scars? You wanna know how I got them?"
— The Joker, The Dark Knight
Advertisement:

Many times, when an author wishes to identify a certain character as a badass, said character will be given some sort of horrific permanent disfigurement. Most of the time, the disfigurement will stay unnoticed, possibly out of respect for they that are marked, or because the story behind it is too horrible for the others to imagine. But there always exists the chance that some bystander will ask about the scar, in which case the Badass is contractually obliged to explain it. When they are, expect the story to be long-winded, fantastical, and involving at least one Moment of Awesome. In other words, a Remember When You Blew Up a Sun? moment.

Super-Trope to A Scar to Remember, when the story has the scar. Similar to Scar Survey, but can occur between any two characters (not just hero/heroine) at any time (not just after sex). Can overlap with Rugged Scar. In the case of Rugged Scar, the story is not the important part, just the general fact that having the scar makes the character seem tougher.

The reason King Olly went crazy is because his Toad creator scribbled on him, being the paper equivalent of a scar.

The reason King Olly went crazy is because his Toad creator scribbled on him, being the paper equivalent of a scar.