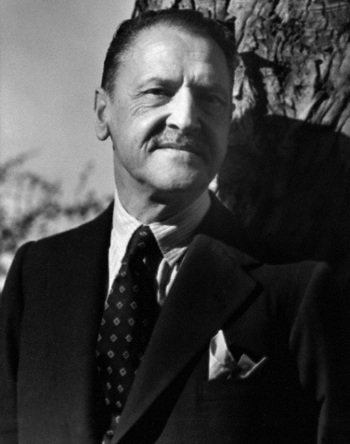 William Somerset Maughamnote Pronounced "Mawm" (25 January 1874 – 16 December 1965) was a British novelist, short story writer, and playwright. He was highly successful throughout the first half of the twentieth century. The novelist Gore Vidal wrote that "It is very difficult for a writer of my generation, if he is honest, to pretend indifference to the work of Somerset Maugham. He was always so entirely there." In addition, Maugham left behind some pithy sayings.

Most famous today for the semi-autobiographical Coming of Age Story Of Human Bondage. His short story and play The Letter were twice adapted into Hollywood dramas. His short story "Miss Thompson" was adapted into a play called Rain, a film called Sadie Thompson, and another film also called Rain. His later novel The Razor's Edge was made into a film in 1946 and again in 1984.

In 1919, he wrote a play called Home and Beauty, a Romantic Comedy loosely based on the Narrative Poem Enoch Arden by Alfred, Lord Tennyson. This play was renamed Too Many Husbands for its New York run and was made into a film in 1940 under that title. It later had a Musical remake as Three for the Show.

He was also an early master in the genre of modern Spy Fiction, with much of his Ashenden stories inspired by things that happened to him in his brief time as a spy in the First World War. His influence was particularly noticeable on Ian Fleming. Supposedly, he wrote more Ashenden stories, but no less than Winston Churchill told him to burn them for being too dangerous to recount. Notably, Ashenden also appears in Maugham's straight literary novels.