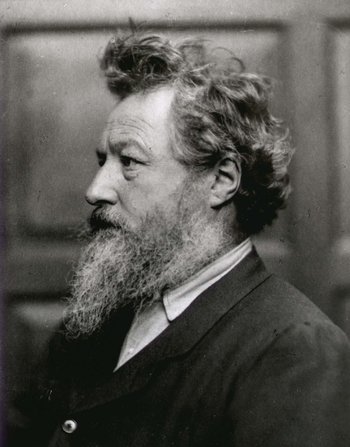 If you want a golden rule that will fit everybody, this is it: Have nothing in your houses that you do not know to be useful, or believe to be beautiful.
From a lecture entitled “The Beauty of Life” (1882).
Advertisement:

He is perhaps best known today for his design work: he was a major contributor to the revival of traditional textile arts and a major influence on the Arts and Crafts movement.

Horrified by the ugliness and soullessness of nineteenth-century industrial capitalism, Morris became a committed socialist. He was a leading figure in the Socialist League (along with Karl Marx’s daughter Eleanor), and he believed his art, which valued beauty, craftsmanship and nature over mass-production and consumerism, to be an extension of this.

A prolific poet and prose author, his best known written work is News from Nowhere (1890), a utopian novel depicting the idyllic agrarian society he hoped would be created following a socialist revolution. His pseudo-medieval fantasies, such as The Wood Beyond the World (1894), The Water of the Wondrous Isles (1895), and The Well at the World’s End (1896) were a key influence on both J. R. R. Tolkien and C. S. Lewis.

Oh, and he also set up a printing press, translated several Icelandic sagas and founded the movement to protect historic buildings in Britain.

Works by William Morris with their own pages:

Other works by William Morris contain examples of: