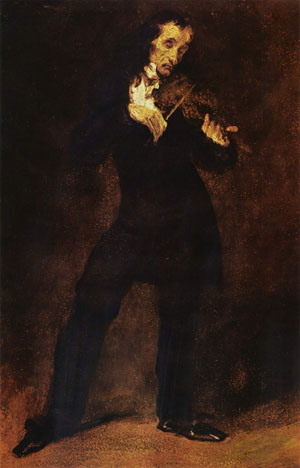 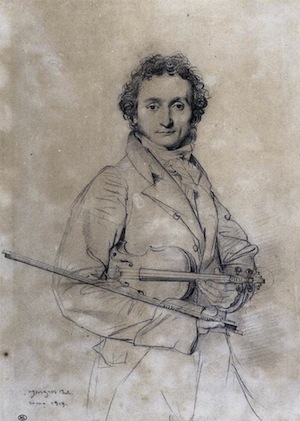 Two portraits of Italian violinist Paganini, top by Delacroix (romanticism), bottom by Ingres (enlightenment).
"One impulse from a vernal wood
May teach you more of man,
Of moral evil and of good,
Than all the sages can."
— William Wordsworth, for team Romanticism
"People aren't going to change, for better or for worse. Technology's going to be so cool. All in all, the future will be okay!"
— Randall Munroe, for team Enlightenment

Some Eighteenth century people believed that reason and science are good and therefore things would just go on improving forever. This optimism characterized a period that came to be known as the Age of Enlightenment. At the end of this period, mass movements in America and France, and the Industrial Revolution in England, changed the world forever, making people realize that society in the 19th Century was the first that could conceive itself to be radically different from the past. This led to a sense of disillusionment and alienation began to spread, and the Romanticist movement rose up as a backlash. Romanticists believed that the advances made by The Enlightenment were creating an oppressive, and conformist society - and that science and rationality could never hope to truly understand the world and the human personality and that the modern world's progress came at the price of cherished values from the distant past which was slowly dying out. Though the Enlightenment and Romanticist movements are long gone, the general ideas behind each - the dialectic, if you will - survives to this present day.

Romantic and Enlightened themes are very common in fiction. For example, Enlightenment-flavored science fiction might portray the future as a world of progress, friendship, brotherhood and Crystal Spires and Togas, with barbaric forces threatening the new utopia (e.g. Star Trek). Romanticist-themed science fiction might portray the future as an unpleasant Crapsack World, with high technology but low social quality, full of depression, dehumanization and alienation (e.g. everything Cyberpunk) with the happy souls being those who escaped to the countryside, if possible (like in We and Brave New World).

Note that 'enlightened' used in such context, is sometimes a loaded word, often used to indicate a higher or better state or level of understanding. In this context the 'enlightened' approach isn't intrinsically better, just as it isn't intrinsically worse - it's a different way of approaching a concept that utilizes different methods and produces different results. Romanticism and Enlightenment are also tied to the Dionysian (wild, visceral, ornate) and Apollonian (restrained, cerebral, classicist) ideals of aesthetics in the arts. Compare the Apollonian/Enlightenment style of Neo-Classicism with the Dionysian/Romantic neo-Gothic revival, or, say, the Apollonian/Enlightenment style of Stanley Kubrick with the Dionysian/Romantic style of Steven Spielberg.

Bear in mind that contemporary invocations of the Enlightenment and Romanticist theme does not quite conform to the original Englightenment and Romanticist movements. The works of Rousseau, Voltaire, Locke, Hume, Wordworth, Byron, Keats and Shelley have greater instances of continuity, Unbuilt Trope and nuance than the modern perception of that era. The general perception is that writers and artists gravitate towards Romanticism, while scientists favor the Enlightenment. Politicians (in most places) favor the Enlightenment while appealing to Romantic sentiments of nationalism, traditions (real and invented) and culture. Seeing as Most Writers Are Writers, Romanticism is generally overrepresented in media, with the exception of Science Fiction writers (and even there most well-known classics usually have a Romanticist message).

Tropes shared between them, but handled in different ways: