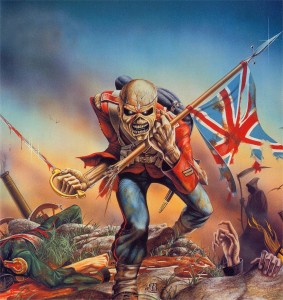 Are you metal enough for The Crimean War?
"Who needs ghouls and goblins when the real world provides such terrors on its own, right?"
— Todd in the Shadowsnote He expected a straight example of this trope when reviewing the witchcraft themed rock band Coven; he ended up getting an allegorical folk song instead.
Advertisement:

So you're writing a Heavy Metal song. You've got a few good riffs and chord progressions down, but now you need lyrics. You don't want to write about Satan, existing works of fiction, elves and orcs, politics, the evils of religion or even about metal itself... so what do you write about? Well, history, of course!

Note that to fit this trope, the lyrics have to be about a specific historical event. Metal that just evokes the imagery of a more loosely defined historical setting (e.g. Viking Metal or Pirate Metal) is not this trope — that's more of a Period Piece. Also note that if the historical events in question were current when the song was written, then that's Ripped from the Headlines instead; for example, the Dead Kennedys' "Holiday in Cambodia" wouldn't be Horrible History Punk Rock.

Horrible History Metal usually averts Mad Lib Metal Lyrics; it is, after all, hard to write meaningless rambling and still maintain it's "about history"... although some bands certainly try their best.

Has nothing to do with Horrible Histories (although the live-action TV show did once feature a Heavy Metal pastiche song about William Wallace, so perhaps not quite nothing...).