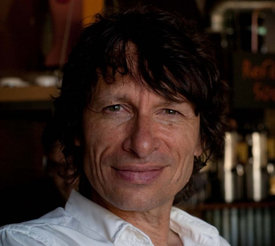 "Are you sturdy enough to move to the front?
Is it nods of approval or the truth that you want?"
— "Harder To Believe Than Not To"
Advertisement:

Steve Taylor is a Contemporary Christian musician and filmmaker who burst onto the (relatively dead at the time) Christian music scene in the early 1980s. At a time when Christian music had stagnated, Steve Taylor was a welcome breath of fresh air, utilizing musical styles that many in the church viewed as dangerous or even outright Satanic. Steve's career was characterized by several scuffles with televangelists and other figures in protestant Christianity, with Jimmy Swaggart going so far as to devote an entire chapter to Taylor in his book "Religious Rock & Roll: A Wolf In Sheep's Clothing" and Taylor taking multiple shots at hypocritical Christian figures in his lyrics.

Taylor's music is characterized by a broad, eclectic sound that samples from many genres and plays with many styles. Taylor was always eager to grow as a musician, and has repeatedly lamented how dated his work sounds due to all of the synthesizers (not to mention one truly awkward attempt at rap when the genre was still young). His lyrical content is often snarky or outright sarcastic, which is still something of a rarity in Christian music. At the time his albums were released these lyrics often caused controversy, with more than one Christian book store pulling his albums off the shelves due to tracks like "I Blew Up The Clinic Real Good." Also, while all of his songs deal with an overtly religious theme, not all of them are explicitly "Jesus songs" with some of them merely expressing a religious Christian worldview or criticizing the foolishness and shortsightedness of modern society in a very rock-and-roll manner.

In the early nineties Steve and several other musicians formed a band called Chagall Guevara. Despite, in many ways, being a fairly visionary band for its time, the band did fairly poorly (although it has a small but dedicated fan base that persists to this day) and only released one album before breaking up. Steve lamented this history in the song "Sock Heaven."

Steve Taylor is also a video producer, and was the first explicitly Christian "act" to feature a music video on MTV. The videos for "Meltdown At Madame Tussaud's" and "Jim Morrison's Grave" in particular were well-received. After the release of "Squint," he produced a video compilation of several music videos for nearly every song on the album. Thereafter, he decided to pursue a career producing videos and movies instead of creating music under his own name, although he spent some time producing for Sixpence None the Richer and (believe it or not) Chevelle and worked closely with Newsboys for awhile, even writing the lyrics for some of their best-known songs. He also wrote a song for one of the VeggieTales movies.

After a successful Kickstarter campaign, Steve Taylor assembled a new band and released the triumphant album Goliath in 2014. Longtime fans and newcomers alike generally agree that it's his best work ever.

His albums in chronological order and some of the more important or noteworthy songs on them are:

"As I promised if elected this election day, with the help of God almighty, I'll do it my way!"