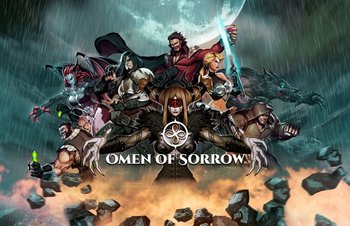 Omen of Sorrow is a 2.5D horror-themed indie Fighting Game created by Chilean studio AOne Games and published by Soedesco exclusively for the PlayStation 4. It features an cast of characters inspired by several Gothic and horror works such as Dracula, Frankenstein's Monster, the Mummy and The Hunchback of Notre Dame with 12 initially available characters at launch. The gameplay is inspired by modern Mortal Kombat games, but features unique mechanics such as "Fortune" gauge (a meter that swings up and down depending on player action in combat: aggressive actions and moving forward make it go up, while being overly defensive or being hit too much makes it go down) and once its fully charged, the user can enable "Blessed" mode, in which the character gains the ability to cancel normal and special attacks in a very free-form way, allowing for custom combos that normally would not be available.

The game was released in November 6, 2018 and it's available in local and online multiplayer