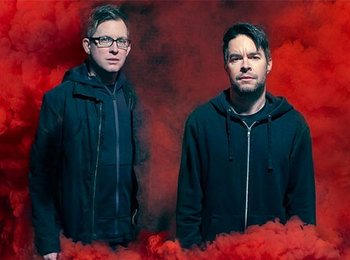 Sam and Pete Loefller
Chevelle is a hard rock band from Grayslake, Illinois. Formed in 1995, the band consisted of three brothers: Pete Loeffler (guitar, vocals), Sam (drums), and Joe (bass). They're named after the Chevy Chevelle, a car that the brothers' dad liked.
Advertisement:

With their second album, Wonder What's Next and its breakthrough singles, "The Red" and "Send the Pain Below", Chevelle achieved great mainstream success. If you listen to any Alternative music station regularly, you've probably heard several of their songs. The band's style features heavy, down-tuned riffs, a driving rhythm section and Pete Loeffler's versatile singing, which can jump from a serene whisper to a shout in a moment's notice. Joe left the band in 2005 for disputed reasons and was replaced by Dean Bernardini, Pete and Sam's brother-in-law. In 2019, he left the band.

Tropes Off to the Bull: