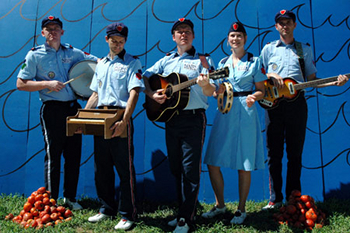 Daniel Smith was raised in a family of musicians—his dad, Lenny, has about 180 songs to his name, including the one hit "Our God Reigns". In college Daniel began rebelling against his upbringing—then had a spiritual reawakening in his senior year and pulled a 180. This reawakening inspired him to write a group of songs, for which he recruited his siblings and friends to help him perform. He called the project Danielson to signify his newfound realization that all believers are sons and daughters of God. In 1994, Daniel submitted the recorded album as his senior thesis; he received an A. Then he got a recording deal and never looked back.

Since then, Danielson has earned attention for their bizarre sound (did we mention how high Daniel Smith's singing voice is?) and their just-as-strange stage presence. Members of the band initially performed in nurse's uniforms, to symbolize the healing power of music. For a period, they played in choir robes and chain mail (to symbolize royalty) but soon even Daniel agreed that these looked ridiculous. For solo shows, Daniel would dress up as a tree bearing "the fruit of the Spirit". Since 2006, the band has been wearing custom uniforms, meant to look like a cross between the service industry and the scouts.

Over the years, the band's lineup has changed, and Daniel changed the name to reflect that. When more of Daniel's siblings joined, the band was called the Danielson Famile. For shows and albums with a greater focus on Daniel Smith solo, he performed as Brother Danielson. And the largest ensemble, with more of a rock influence, was called Danielsonship. And then Daniel decided this was too confusing, so he went back to just calling everything Danielson.