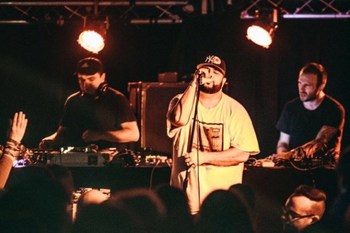 From Left-to-Right: DJ rEK, MC Dälek, Mike Manteca
Dälek (pronounced "die-a-leck") are an experimental hip hop band from Newark, New Jersey. They are well known for helping to pioneer the genre of industrial hip hop in the late 90's and early 2000's. They have an extremely heavy, aggressive, and experimental sound, incorporating elements of industrial music, noise, shoegaze, ambient, and extreme metal, paired with angry, socially conscious lyrics which rail against government and religion. The band is currently composed of MC Dälek, Mike Manteca, and DJ Rek.
Advertisement:

Not to be confused with the popular Omnicidal Maniac alien race from Doctor Who, whose name lacks an umlaut and is pronounced roughly as it looks.