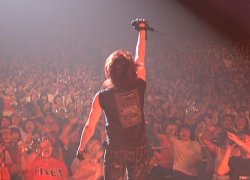 When Audience Participation and Music meet, this is the result. A song, especially a live one, where the audience is expected to sing part of the lyrics. Follow the Bouncing Ball may come into play here.