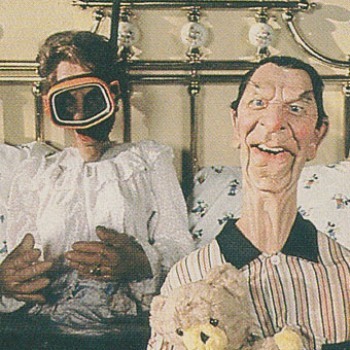 Ronnie and Nancy
"Land of Confusion" is a song from Genesis' 1986 album Invisible Touch, written by Mike Rutherford and dealing with the uncertainties of the Cold War in The '80s. The music video for this song is well remembered, because it was maybe the first major music video featuring puppets. Said puppets were made by the creators of the UK-based satirical show Spitting Image, which included puppet caricatures of almost every well-known political figure and celebrity of the '80s. Since the show already had a puppet of Phil Collins made, Phil himself requested the Spitting Image team to make puppets of the other two members of Genesis, Tony Banks and Mike Rutherford, as well as to re-make his own puppet.
Advertisement:

The video starts with an elderly Ronald Reagan going to bed with his wife Nancy (as well as a chimpanzee), as he suddenly starts having nightmares featuring an army of soldiers stomping through a jungle filled with the heads of many political figures. While Reagan starts sweating profusely (almost drowning in sweat), his other selves in the dreams begins to have strange adventures filled with dinosaurs and more political figures. These scenes are interspersed with puppet versions of Genesis trying to organize a huge concert with almost every big name of 80s showbiz (in a parody of "We Are the World"). In the end, Reagan wakes up from his dreams, but accidentally presses the "Nuke" button, instead of the "Nurse" button, next to his bed.

The video can be viewed here

. Not to be confused with the music video of Disturbed's cover of this song.

And these are the tropes we're given: