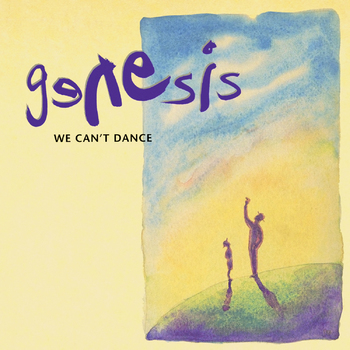 "Do you believe in God? 'Cos that's what I'm selling!"
I gave everything that they wanted
But still they wanted more
We sweat and we toiled
Good men lost their lives
I don't think they knew what for

I sold them my heart
I sold them my soul
I gave everything I had
Ah, but they couldn't break my spirit
My dignity fought back
(fight back)
(just fight back)
"Driving the Last Spike"
Advertisement:

We Can't Dance is the fourteenth studio album by English Progressive Rock-turned-pop rock band Genesis, released in 28 October 1991 by Virgin Records in the United Kingdom and Atlantic Records in the United States. Their last album with frontman Phil Collins and consequently the last to feature the most recognizable three-man contingent of Collins, Mike Rutherford, and Tony Banks, the album marked an end to the band's four-year hiatus that followed the end of their successful Invisible Touch tour in 1987, during which time the trio returned to focusing on their individual solo/side projects, with Collins notably releasing his blockbuster success …But Seriously during the interim. With Collins' success as a solo artist more than well-established, Rutherford and Banks fully expected Collins to ditch the group to focus on his own work, only for Collins to stick around for another album as part of Genesis.

Musically, We Can't Dance continues the pop rock style that Genesis had been finding success with throughout the previous decade, but strips down the production to offer a better balance between their pop and prog elements. Notably, the thumping, twinkling synths that were omnipresent throughout Invisible Touch are replaced with more subtle, softer synth pads more reminiscent of Banks' keyboard work when Genesis was fronted by Peter Gabriel. The album also leans more closely into the prog side of Genesis' sound, with tracks like "No Son of Mine", "Driving the Last Spike", and "Fading Lights" demonstrating that the band were still willing to hold onto their roots, though still accentuated with a number of more pop-friendly songs like the anti-televangelist satire "Jesus He Knows Me" and the crooning ballad "Hold on My Heart".

We Can't Dance was still a huge commercial success for Genesis, topping the charts in the UK, Australia, and several other European nations; it reached #4 on the Billboard Top 200 album chart in the US. It was certified quintuple-platinum in the UK and quadruple-platinum in the US. We Can't Dance was furthermore supported by a lengthy eponymous tour spanning 78 shows between 1992 and 1993, selling out arenas and stadiums worldwide. The songs from this tour were later compiled on the live albums The Way We Walk, Volume One: The Shorts and The Way We Walk, Volume Two: The Longs, respectively released in 1992 and 1993 (with the former also including tracks from the Invisible Touch tour).

We Can't Dance was supported by six singles: "No Son of Mine", "I Can't Dance", "Hold on My Heart", "Jesus He Knows Me", "Never a Time", and "Tell Me Why". Only one of those broke the Top Ten on the Billboard Hot 100 chart: "I Can't Dance" (#7). That matched its highest position in the UK, where "No Son of Mine" beat it at #6. "I Can't Dance" was nominated for the Best Pop Performance by a Duo or Group With Vocals Grammy in 1993, though ultimately lost to Céline Dion & Peabo Bryson's cover of "Beauty and the Beast".

"We both know we've troped here before"